The Ministry of Environment and Natural Resources has called upon all Sri Lankans to vote for the Sinharaja Forest to be included among the `New 7 Wonders of Nature`. Voting for nominees will continue until 31.12.08. The New 7 Wonders Panel of Experts will then select 21 finalists, from which voters worldwide will elect the New Seven Wonders of Nature. People can vote for the Sinharaja Forest by going to the link: http://www.new7wonders.com/nature/en/nominees/asia/c/SinharajaForest/ 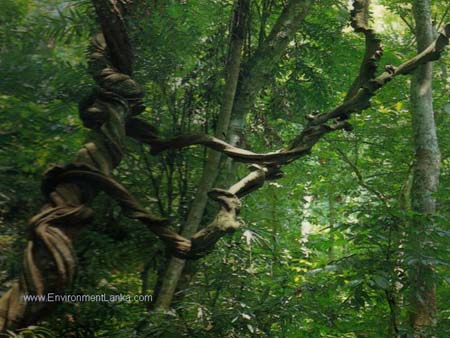 Sinharaja is a forest in south-west wet zone of Sri Lanka which contians a high Bio diversity. A large proportion of flora and fauna in this forest is endemic to the country and some endemic to the Singharaja Forest itself. This is a very good place to see many endemic birds such as Ceylon Lorikeet, Layard’s parakeet, Jungle and Spur Fowl, Ceylon Wood Pigeon, Grey Hombill, Spotted wing Thrush, Rufous and Brown- capped Babbler, Ashy-headed Laughing Thrush, Ceylon Blue Magpie, White Headed Starling, Ceylon Hill Mynha, Legge’s Flowerpecker. The clear cut roads in to the jungle provide easy access to the forest. This important forest is a Man and Biosphere Forest reserve and it is considered as a World Heritage Site.

Fauna Endemism is high, particularly for birds with 19 (95%) of 20 species endemic to Sri Lanka present. Endemism among mammals and butterflies is also greater than 50%.
Threatened mammals are leopard Panthera pardus and Indian elephant Elephas maximus (E). The endemic purple-faced langur Presbytis senex is present. Birds considered to be endangered or rare (Hoffmann, 1984) are Sri Lanka wood pigeon Columba torringtoni, green-billed coucal Centropus chlororhynchus, Sri Lanka white-headed starling Sturnus senex, Sri Lanka blue magpie Cissa ornata, and ashy-headed babbler Garrulax cinereifrons, all of which are endemic, and red-faced malkoha Phaenicophaeus pyrrhocephalus. Of interest is the presence of Sri Lanka broad-billed roller Eurystomus orientalis irisi (I), sightings of which have decreased markedly in the last five years (Zoysa and Raheem, 1987). Of the reptiles and amphibia, python Python molurus is vulnerable and a number of endemic species are likely to be threatened. Noteworthy species include Calotes liolepis, the rarest of all Agamids on the island, the rare rough-nose horned lizard Ceratophora aspera, restricted to part of Sri Lanka’s wet zone, and Ramella palmata, a rare endemic microhylid (Zoysa and Raheem, 1987). Threatened freshwater fish are combtail Belontia signata (R), smooth-breasted snakehead Channa orientalis (R), black ruby barb Barbus nigrofasciatus (V), cherry barb Barbus titeya (V) and red-tail goby Sicydium halei (V), the conservation status of which is considered in Evans (1981). Of the 21 species of endemic butterfly, Sri Lanka rose Atrophaneura jophon is vulnerable (Collins and Morris, 1985). Sri Lankan five-bar sword Graphium antiphates ceylonicus, which is considered to be very rare, is not uncommon in Sinharaja at certain times of the year (J.N. Banks, pers. comm., 1986). Zoysa and Raheem (1987) comprehensively summarise what is known about the fauna.

An early account of the fauna is given by Baker (1937). Preliminary lists of the fauna (viz. mammals, birds, reptiles, amphibians, fishes and butterflies) have been compiled (March for Conservation, 1985) and are included in the draft conservation plan (ForestDepartment, 1985).

Two main types of forest can be recognised. Remnants of Dipterocarpus forest occur in valleys and on their lower slopes, with hora D. zeylanicus and bu hora D. hispidus present in almost pure stands. Secondary forest and scrub occur where the original forest cover has been removed by shifting cultivation and in other places the forest has been replaced by rubber and tea plantations (Rosayro, 1954). Mesua-Doona (Shorea) forest, the climax vegetation over most of the reserve, covers the middle and upper slopes above 500m (Rosayro, 1942) or above 335m as suggested by Gunatilleke and Gunatilleke (1985). Garcinia hermonii followed by Xylopia championii invariably dominate the understorey tree stratum, a range of species dominate the subcanopy and na Mesua nagassarium usually predominates in the canopy layer (Gunatilleke and Gunatilleke, 1985). Details about the structure and composition of the vegetation are summarised by Zoysa and Raheem (1987).